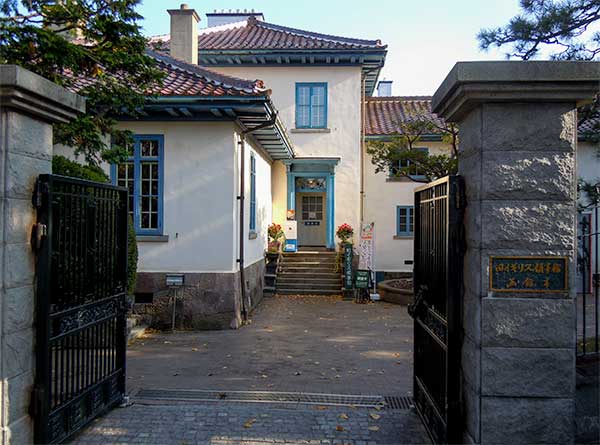 This place is written as [旧英国領事館] in Japanese.

The Former British Consulate(旧英国領事館) is located in the foot of Mt.Hakodate, left side of Motoi Saka slope in front of Motomachi Park.

Hakodate is one of the main port city in the Meiji era, which was opened to the foreign country for trade in 1859. Then for 75 years, Union Jack had been raised in Hakodate.

The first building was located in Shomyoji Temple temporarily before new building was constructed near Hakodate Orthodox Church. After some fires, the current building was reconstructed here by the Shanghai Construction Bureau of British Government in 1913.

The Consulate was closed in 1939. The building was designated as a tangible cultural property in 1979 and it is restored by the city in celebration of its 70th anniversary and opened to the public as the Opening-Port Memorial Hall.

Several exhibitions inside the facility were updated in conjunction with the 150th anniversary celebration of the Hakodate Port’s Opening in 2009. The room of consul and his family are restored and opened, so you can sit on the chair of the 3rd consul, Richard Eusden.

Then, the building has a new role as a symbol of the port opening. There is a beautiful rose garden behind the building and a cafe and a British style souvenir shop are there. More, you will see the exhibition room presenting several items related to the history of Hakodate, especially from Meiji era to the World War II. If you want to take a break, this is one of the best place to be.

From here, you can see other sightseeing spots by walking, such as Former Soma Residence, Old Public Hall of Hakodate Ward, Motomachi Park, Church area and so on. You will find the nice view of Hakodate from Motoisaka slope, just in front of The former British Consulate.

*Group admission fees apply to groups of 15 persons or more. When visiting on school field trips, even individual students can utilize group admission fees.
Discount ticket available for visiting more than two museums including these museum below: