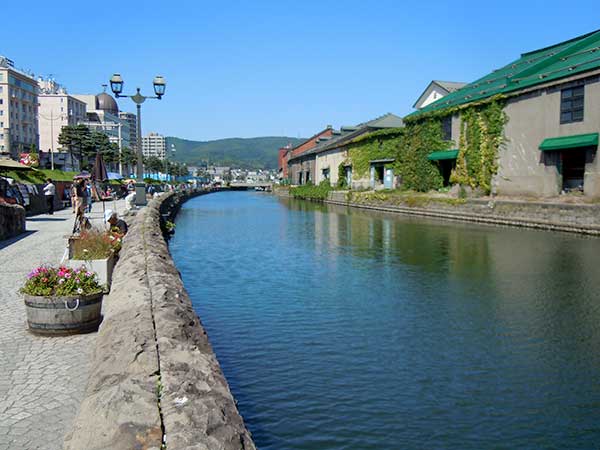 Otaru is located in the northwest-ward of Sapporo, 30 minutes by train. The 7th largest city in Hokkaido, flourished as a port city for a long time, Otaru used to have more than 200,000 population but now, it has been declining year by year so that Otaru’s population is under 130,000. The city of Otaru is the historical place, where there are many historical buildings along with Otaru Canal. These are interesting places and contents for visitors.

8 min. walk from Otaru Station This area is the most popular tourist spot in Otaru. Along the canal is a array of stone warehouses, many of them are designated as the historical buildings and most are restored cafe or restaurant. In the evening the buildings are lit up and give tourists an unforgettable scene unlike in daytime. Canal Plaza is a converted warehouse that houses souvenir shops, a tourist information center, and cafes. Open from 9:00 A.M. to 6:00, 7:00, or 8:00 P.M. (depending on the season).

Otaru is a city famous for its sushi. There are about 130 sushi restaurants you can found. Sushi Street, a collection of some 20 sushi restaurants, is reached by walking toward the canal from National Route 5. It is a 10-min walk from Otaru Station.

The museum dedicated to music boxes is a 5 min walk from Minami Otaru Station. (or 23 min from Otaru Station). It features a collection of some 3,400 music boxes from around the world. The building was constructed in 1912 and shows a grand appearance. The Museum’s Hall No. 2 is an antique museum where performances on an Aeolian Pipe Organ are given 4 times a day. This pipe organ is rare one of those, only a few existed in the world.  “You-kobo(遊工房)”, a music box and handicrafts studio, lets visitors make their own music boxes.

A large number of stone warehouses and stately buildings were constructed during Otaru’s economic heyday in the early 20th century before World War II. These buildings retain their original appearance today as a historical buildings.

Former Otaru Branch of Bank of Japan Museum of Finance(日本銀行旧小樽支店)

Otaruisacityalsofamousforits glass. There are a lot of glass factories such as,