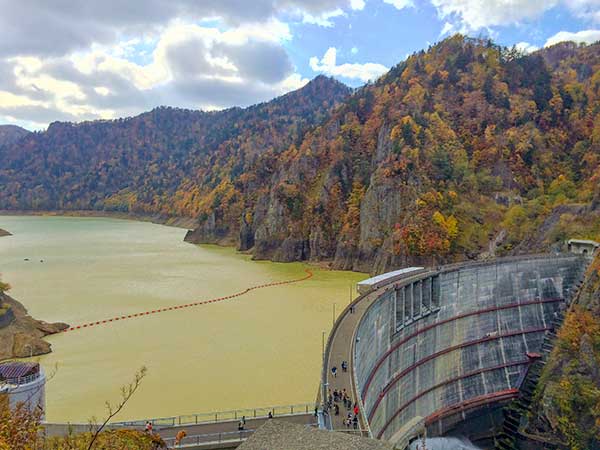 This place is written as [豊平峡ダム] in Japanese.

Hoheikyo Dam is located in Jozankei, Minami-ku, Sapporo and one of the most famous sightseeing place in Sapporo. It was built at the upper stream of the Toyohira river. The water is for domestic use in Sapporo.  With 102.5 meters height and 300 meters width, Houheikyo Dam is an arch type concrete dam of the ‘concrete dome arch dam’ type. As this type of dam, there are only two dam in Hokkaido except Oku-Shimukappu Dam(the Shimukappu river). The Dam is called ‘Jouzan-ko'(Lake Jozan). This is a famous sight for autumn leaves in Shikotsu-Tōya National Park.

The Toyohira river flows through the city of Sapporo. The river is so wandering that it often flooded after the heavy rain at the Meiji era. The Hokkaido Development Commission decided to repaire the Toyohira river to a straight line. After World War II, the population of Sapporo increased quickly, so that it became under a shortage of water and power supply. More, there were still some floods as usual after the heavy rain or the water of melted snow in the beginning of spring. The Hokkaido Development Bureau made a plan to build a dam to prevent danger of flood and to supply more electric power. As a result, The Houkeikyo dam had been built here from 1965 to 1972. It was the year of Sapporo Winter Olympic Game. At that time, the population of Sapporo was one million(now, 1.92million) and the Hokeikyo dam has been a important origin of supply for water and power.

After that, the population of Sapporo went to increase, so that another dam was built at the opposite side over the town of Jozankei, which is called the Jozankei dam. These two dams support the life of Sapporo.

The Houheikyo Dam was selected one of the 100 beautiful dams of Japan in 2005. This is a famous sight for autumn leaves. There are many hot spas in Jozankei. This site is a very famous hot spa area in Japan. see this article ‘Houkeikyo in Autumn, surrounded by Red, Yellow and Deep Green’

Until Oct, 26 2014, a shuttle bus is available to go to Houheikyo Dam parking at Jozankei Tourist Association.

NO car. Only Hybrid Electric Bus can go to the dam. You can get to the Dam about 30 minutes by waking. It is about 2 km.

A discount ticket is available. After visiting Houheikyo Dam, you can go to hot spa in Jozankei. Admission charge is included bus fare and hot spa below. Click to open a map for Jozankei Cafe, Shopping and Hot Spa