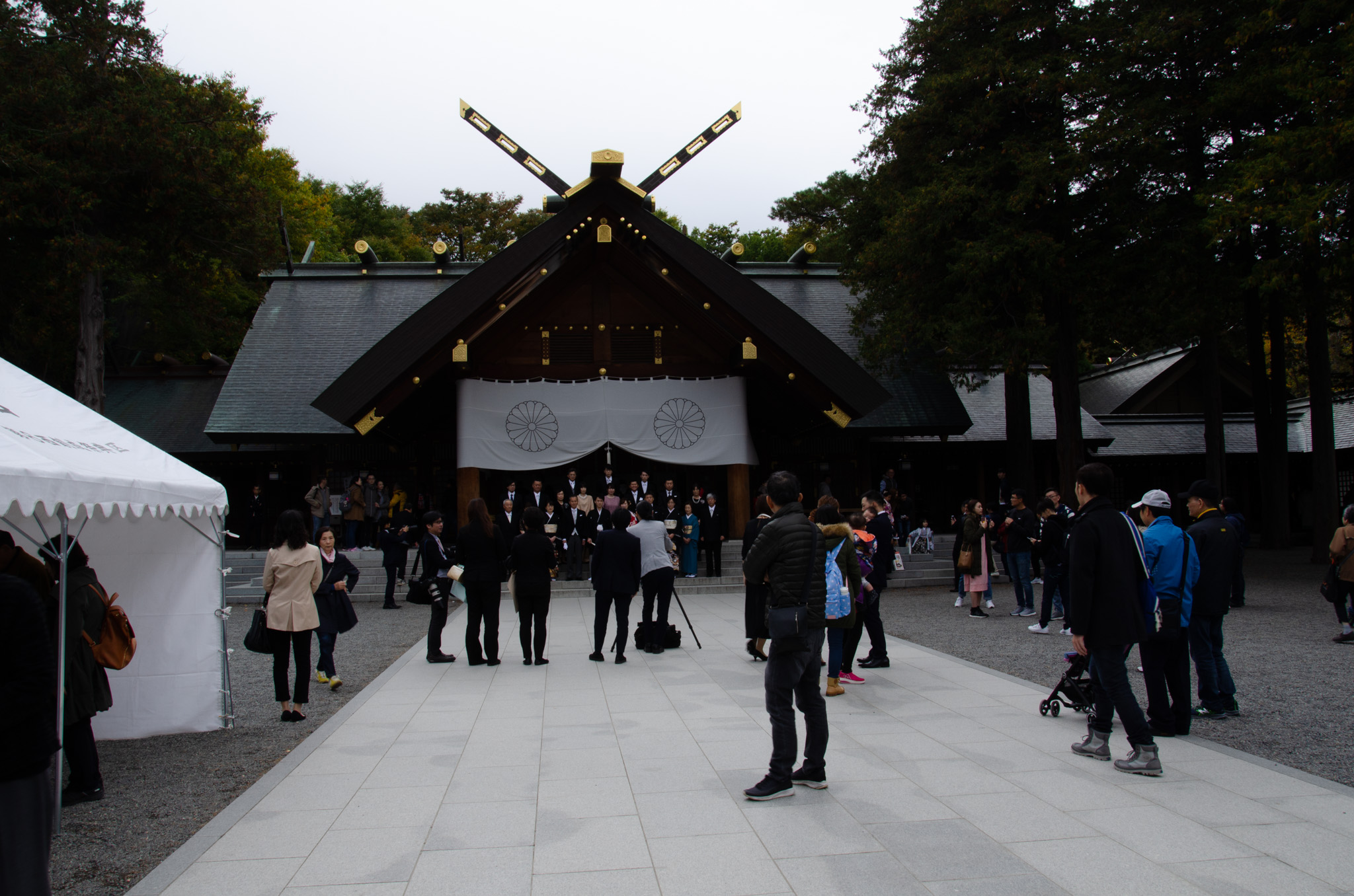 This place is written as [北海道神宮] in Japanese.

Hokkaido Jingu is one of the most famous sightseeing spots in Sapporo. Located at the west end of downtown Sapporo, called “Maruyama(円山)”.

Hokkaido Jingu was built for defense the land of Hokkaido in the Meiji era such as Russia which had been dominating Chishima and Sahkalin. That’s why the large Torii of shrine is directed to the north-east.

Another shrine called “Kaitaku Jinjya(開拓神社)” that means “development for Hokkaido”. where many people were worshiped who contributed developments of early Hokkaido such as Rinzo Mamiya.

Hokkaido Jingu(Shrine) was built in 1871 named as Sapporo Jinjya(Shrine). There are three deities worshiped at that time.

Why is Jinjya for defense and their purpose?

Emperor is something like a God and has a deep connection to the founder of Japan traditionally which is called “Amaterasu Ohmikami(天照大神)” according to Japanese myth.

In the Meiji Era, history and myth are treated as the same so that Emperor is something like God for Japanese. Shrines are places and buildings where gods live and show Emperors’ power that defenses for Japan. This ideology was built up from Meiji to Showa era when an array of wars had occurred everywhere around Japan, China and Russia.

Shrines is the place where the government rules and educates peoples. Now war is over but it is true there are some people who want to rule as the same manner as Meiji era.

Unfortunately, the main building was burned down in 1974. Somebody set fire but the case has been unsolved. The Shrine was rebuild in 1978.

From the midnight of 31st December to 1st January,  mega dozens of people go to Hokkaido Jingu. It takes more than 1 hour for walking from the entrance to the main building that happens every year.

This is the most famous and a big shrines’ festival of Sapporo and Hokkaido. Many foods booths opens alongside the paths. Omikoshi parade is held from Hokkaido Jingu to the central area of Sapporo.

This is one of the biggest events next to Yosakoi Soran Festival in Sapporo. After that, the summer has come.

When you go out from No.3 exit at Maruyama Kouen Station, you’ll see the entrance of Maruyama Park ahead across the road.

Walking to the end of the path, an open space will appears. That is the front of the Shrine. First of all, you have to go left side, ‘Temizu-ya’. Not only for purifying your hands and mouth, but also your mind.

Before Enter the Shrine, how to purify called ‘Temizu’（手水）

Even if in the winter, you’re supposed to do ‘Purify’ before worship.

More visiting spots if you have time

Located to the opposite side of Hokkaido Shrine. As you leave behind the Shrine, take the right side path to the parking for Urasando. Through the parking, you will see the small building of Maruyama Hachijyu-Hakkasho in the woods.

Then you go up to the right way for Maruyama Zoo. It takes within 5 minutes by walk. Maruyama Zoo has been renovating its old facilities so that many people have been coming back here not only families but also young couples.

Asahiyama Zoo in Asahikawa city became the most famous zoo in Japan. But Maruyama Zoo has been making efforts for presentations recently. Very fun!

Next to the Maruyama Baseball Stadium. In winter, you can play skating with rental equipments.

You’re already in the Maruyama Park! You were walking through the Park as you coming. There are many cherry blossoms and people have a ‘Hanami’ party in the early May.

This is a small mountain climbing. It takes about 40 minutes to the top of the Mt.Maruyama. You have to prepare especially your shoes, trekking shoes or climbing shoes better. The area, ‘Maruyama Genshirin’ 円山原始林 is said primeval forest. You can experience an untouched forest left in the urban city.

Across the Miyanosawa-dori, north side of Maruyama Park. Another Starbucks is in Maruyama Class.

When you come back to the subway station, you may drop in at the coffee shop. Walking down along with the ‘Urasando’, you will find a chic building. see Miyakoshiya Coffee Shop WEB site (no english site)

This is one of the most well-known old-established sweets company in Hokkaido. The shop is so familiar that is always crowded. They have not only some old fashioned Japanese cakes but also new modern sweets.
coffee shop : 10:30-18:00

Morihico is one of the best coffee shop in not only Sapporo but also Hokkaido and Japan.

Since 1996, Morihico has started as a small coffee shop in Maruyama that is the old wooden house. The founder, Sosuke Ichikawa renovated the house and opened as a coffee shop.

Now his coffee has been growing up as a NO.1 coffee company in Sapporo and Hokkaido. This is the first memorial shop for Morihiko. Enjoy their coffee and take a break.

Old-fashioned Japanese sweets, as we say ‘Wagashi(和菓子)’. Yoneya is one of the old-established store in Sapporo. If you want Japanese traditional sweets, this is the best shop. It’s worth visiting.