page top
Skip to content
Home > Visit > Historical Place > Hassoan, Why Does Hassoan Stand here? One of the tea-ceremony/Chanoyu house by Kobori Enshu 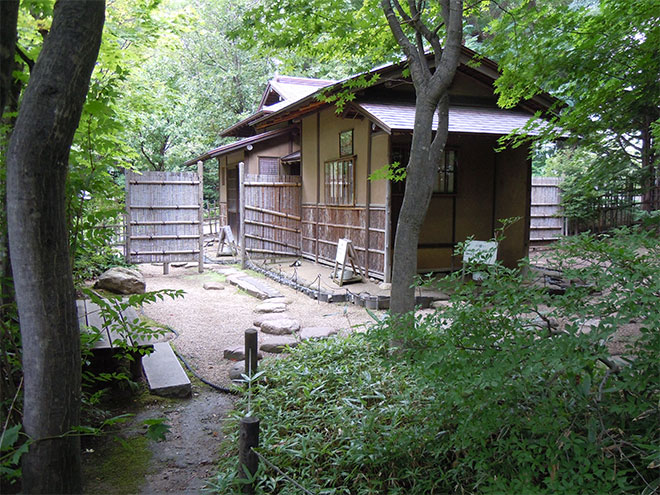 This place is written as [八窓庵] in Japanese.

It was in the early Edo period

When it comes to the tea-ceremony(茶の湯), I am one less than novice. But I love to look at tea-ceremony houses, especially in Kyoto. There are many temples which were built in the age of Fujiwara era and several kinds of Japanese culture arose in these places. Hasso-an(八窓庵) is originally built by Kobori Enshu(小堀遠州) who was a feudal lord, a master of tea-ceremony, an architect and a master of gardener during the early Edo period, from 1579 to 1647.

According to the brochure, Hasso-An is thought to be one of his works, which seemed to be originally located on the ground of Shunzo-in Temple in Nagahama City, Shiga prefecture, before it was relocated to Enkyoji Temple in Kawasaki Village in 1868. After that, it moved to Shana-in Temple in 1902, the Meiji era. Although it is unknown the reason why Kinya Mochida bought the building in 1919, then Hasso-an was relocated in Sapporo. The detail are written in the small guide of Hasso-an which you can get there. Tea-ceremony was popular to Bushi/Samurai in the Azuchi-momoyama era, the early Edo period.

His talent for Art

Although Kobori Enshu was a feudal lord, he well exhibited his talents for building a castle, a tea house and gardening. Featured by Shogun of Tokugawa, he rose in fame. The name of Hasso-an derives from its style of house which has 8 windows. ‘Hasso'(八窓) refers to 8 windows. ‘An’ refers to a small simple house which a Buddhist priest or a recluse lives in.

The aim of Cha-no-yu

The letters of Bosen(忘筌) mentioned the basic concept of tea-ceremony. ‘Bo’ means forgetting and ‘Sen’ refers to a trap for capturing fishes. Then Bosen means, “Forget a trap when you got a fish.” In other word, you may forget tools or operations when you accomplished your purpose. The most important thing is to have a concept what you do it for. It derives from Soshi, a Chinese philosopher who lived around the 4th century BC.

In 2005, there were many tons of heavy snow in Sapporo City, so Hasso-an was demolished completely. The building was rebuilt as the same as that time with re-using the same materials of the original ones in 2008. We can not enter inside the house, walking around and looking at the inside, we can understand the value of this tea-ceremony house. Also there is a beautiful garden where you can enjoy an atmosphere of the Edo period. It is true that we don’t often have an opportunity to  look at the such a beautiful tea house so closely.

If you want to see other beautiful tea houses, you should go to Nanzenji Konchi-in in Kyoto. There is another tea-ceremony room by Kobori Enshu, called ‘Hasso-seki’ and this is one of the 3 most beautiful tea-ceremony room in Japan. I have visited there 3 times. Walking in the Japanese garden, you can spend a peaceful day. Hasso-an is designated as an important cultural assets by the Japanese government.