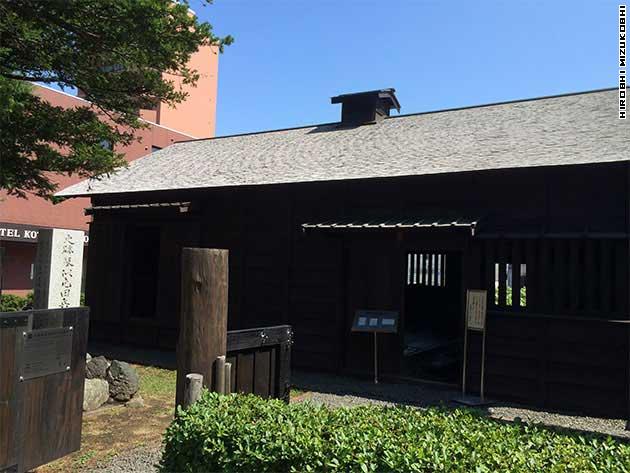 This place is written as [琴似屯田兵村兵屋跡] in Japanese.

This small house is a Military housing of Kotoni Tondenhei Village(琴似屯田兵村兵屋跡) at Kotoni Area, Nishi-ku the west of Sapporo. This is a place of National historical interest. In the Meiji era, the government sent many soldiers and their families in order to defend and develop the land of Hokkaido. They were called ‘Tondenhei’, which means a soldier who trains military exercises and farming. The First Tondenheis in Sapporo were settled in Kotoni Area in 1874. ‘Kotoni’ is derived from ‘kott ne i’ in Ainu, which means hollow land. As the Kotoni Hassamu river through Kotoni, this area is gently‐sloping. In addition to 208 houses, the head office, training house and vocational center were built in this area in 1874. In the next year, more 32 houses were built in Hassamu, next to Kotoni. In 1875, 198 soldiers and their families, 965 people had started to live in Kotoni. They had been developing virgin forest of Nishiku, the west of Sapporo and surviving in such a harsh natural environments at last. About 40,000 Tondenheis and families were settled in Hokkaido and Kotoni Tondenheis were the first settlers in Hokkaido. So that it is not exaggeration to say ‘This is the most historical place in Hokkaido.’ This Military housing of Kotoni Tondenhei Village was given to Senjiro Seino who was from MIyagi pref in 1875 by the government. This is No.133 Military housing. The area of land is about 495m² and 58m² house. Today, only this house has been in existence. The Seino family had been keeping their house for about 100 years. In 1972, the house was restored to keep the original style at that time. So we can recognize the old-days Kotoni, Tondenhei era. Military housing of Kotoni Tondenhei Village was settled a place of historical interest in Japan. This is a very small house but worth visiting. [huge_it_slider id=”38″] [divider]