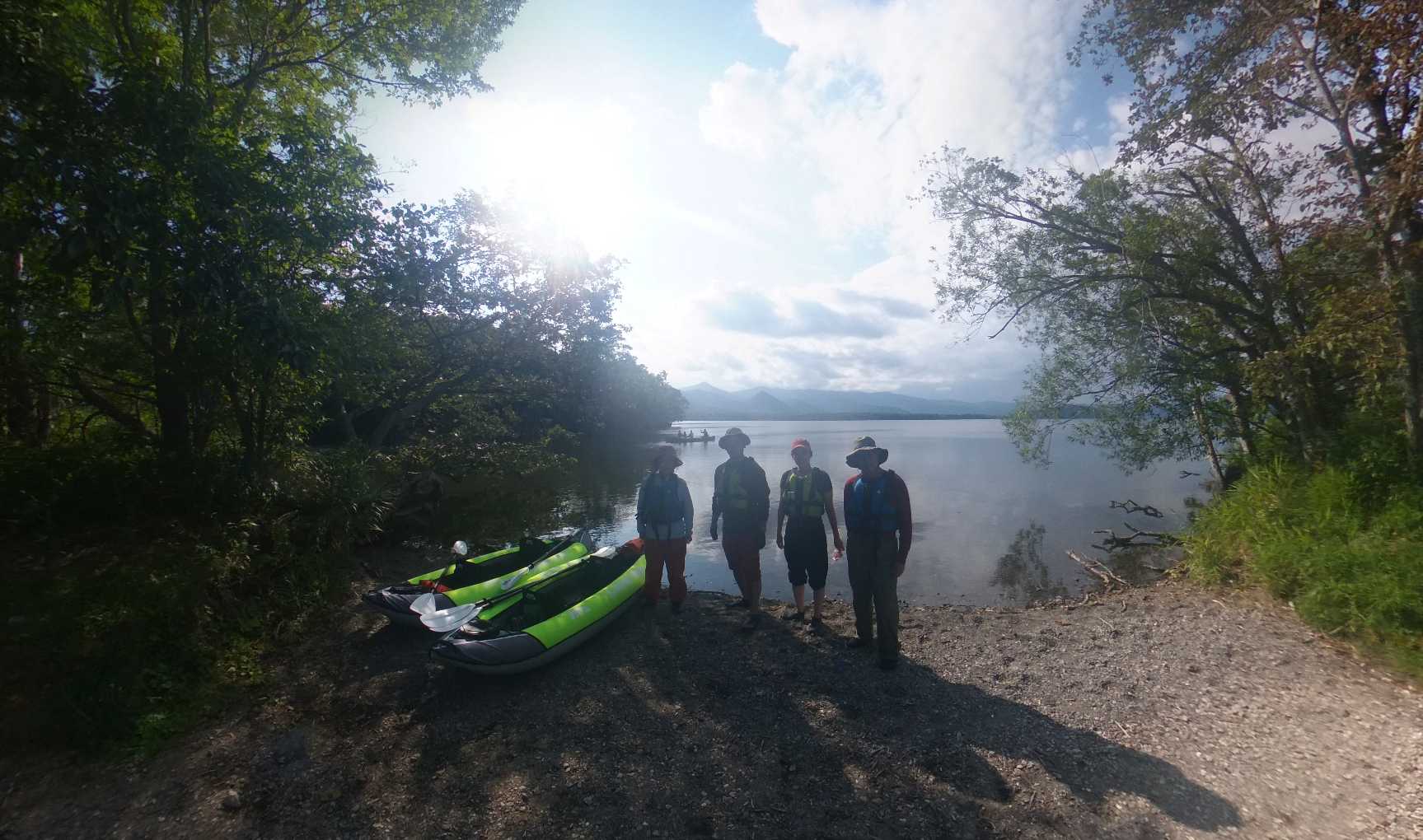 This place is written as [釧路川の川下り] in Japanese.

The Kushiro river is a sacred one for Canoe and Kayak. The river starts from the south of the Lake Kussharoko near a small bridge called  ‘Chokobashi’ where you will find a canoe port.

There are some space for parking. But this is a private area actually, so we are able to park due to owner’s good intentions. We have to say ‘Aligato’.

Anyway, what a beautiful day! we got two kayaks for the beautiful day from Sapporo. In this morning, we’ve already went kayaking on the lake Kussharo around the Wakoto peninsula. That’s why we could be little bid tired.

I saw many people for boating, canoeing and kayaking. SUP(Stand Up Paddle board) is very familiar also.

After that, we got here and ready for our kayak by 20 min. It was almost 15:00. It could be so late to start kayaking down. But we were not aware of that at that time.

Go kayaking to the goal

Now we’re going to kayak down the Kushiro river.

In the beginning, the stream was very easy.

But we had a hard time for controlling our kayak. According to the manual, we are supposed to put off fins which are settled back under the kayak for stabilizing its direction. These are very useful and important equipments. But on the river, the depth of water is not the same as a lake. Some places are shallow, others are deep. And more there are rocks and trees under the water which could damage the bottom of a kayak. That’s why we have to put off the fins on the river.

It makes so difficult to control. So it’s too easy to turn around without a bottom fin. We can’t make our direction easier. Paddle work is the most important, but I missed a lot. As a result, we knocked against fallen trees so many times. That’s really hard, but some times fun maybe?

There was once time when we struck hard. My wife yelled at me ‘Oh my god! So many insects falling on me’.

There was only thing I can say ‘Lucky’. She was with her hat on. If not, there would be so many insects paradise on her curly hair. Our kayaking should be stopped right there, It means totally THE END.

Our Goal had to be changed

It takes about 1 hour and half. According to Googlemaps, it is about 6 km from the canoe port, Kussharoko Kushirogawa canoe port (屈斜路湖 釧路川カヌーポート) to here the bridge Biruwa-bashi.

It was another maybe plus more 7km long to the goal. Unfortunately, there is no canoe port to the Mashu-Ohashi bridge so we decided to quit kayaking down here. Maybe next year, we going to try the rest of it to the bridge Mashu-Ohashi canoe port.

Actually I parked my car at Mashu Michi-no-eki, which is a public station for cars, now we realised our situation this was just on the half-way. Moreover it’s too long to get to the Mashu-Ohashi canoe port before sunset. At this time, we understood we had to start kayaking down in the early morning if we go for the Mashu Ohashi bridge.

Mashu taxi, we got from the Mashu Ohashi bridge to the Kussharo-Kushiro canoe port near the Chokobashi bridge. It costs about 4,000 yen.

From the Biruwa bashi bridge to the Kussharo-Kushiro canoe port. It costs about 2,500-2,700 yen.

Again we called a Mashu taxi at the Biruwa bashi bridge and got to the Mashu Michi-no-eki near Mashu Ohashi canoe port. It costs about 2700 yen.

After kayaking on the lake, we had a lunch at COVO, a very nice Italian restaurant. I really recommend COVO!