page top
Skip to content
Home > Foods > Donburi, Japanese All in One Dish 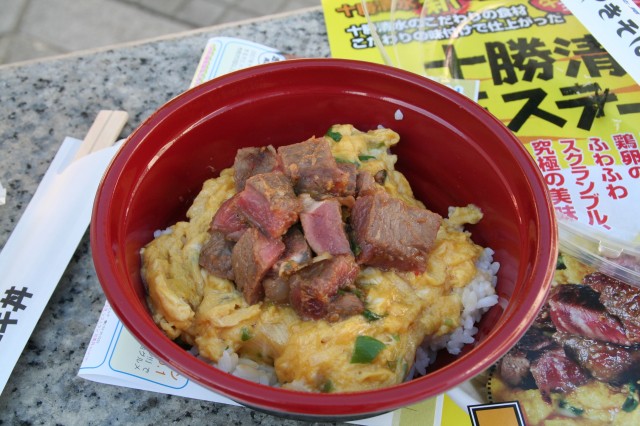 This place is written as [どんぶり] in Japanese.

Donburi is a kind of mixed or combined food consisting of rice and main meal. It is a big bowl putting deep-fried chicken, poke, sashimi, tempura or boiled beaf like a Sukiyaki over the rice. This is all in one meal. Most of Donburis are sweet soy sauce taste. Donburi is a kind of fast food like MacDonald’s hamberger or Donuts, easy and fast. Unajyu(うな重) is similar to Donburi. But a container of Unajyu is a laqured rectangle box like a ‘Wajima’ instead of a big bowl. This is a very premium and traditional container in Japan, so that Unajyu is a special food for average people. Also Unagi, eel is going to be an endangered species, so that they might be prohibited to eat near future. Unadon(うな丼) consists of the same contents of Unajyu, but it sounds cheeper than Unajyu because of its style of the container.

It is very easy to find Donburi shop, Yoshinoya(吉野家), Sukiya(すき家) are popular to eat gyudon. Also you may order some donburi such as Tenpura Don in Soba shop.

Anyway, We call Donburi Don. Both of them are the same meaning.

Oyako means family in Japanese, so that Oyako Don consists of some eggs and their parents’ foodstuff. For example, egg and chicken, salmon eggs and sashimi of salmon, and so on. They are called Oyako Don keeping this condition.

Kaisen means marine products. Kaisen Don is a bowl putting raw fishes over the sour taste rice. This looks like a Chirashi Zushi which is a kind of Sushi, not grasped one.

Ten don is Deep fried Shrimps and vegetables over the rice with sweet soy sauce. Tempra is a Japanese style deep fry which doesn’t consists of bread-crumbs.

Katsu means a Deep fried poke in generally. After all, it is a deep fried poke over the rice with sweet soy sauce which consists cooked eggs and onions. The rice stained with the sauce is tasty, too.

Cooked beef in the sweet soy sauce like as Katsu don over the rice. Like Katsudon, the stained sauce is so tasty that some people ask more sauce putting the bowl. It is called ‘Tsuyu-daku’. If you like more stained rice flavor, you say ‘Tsuyu-daku’ to the person of the shop. ‘Tsuyu’ means soy sauce and ‘Daku’ means more. You would imagine drowned rice in a bowl. That’s it!

When you travel to Obihiro, the east of Hokkaido. Buta don is very famous menu at every restaurant. You could find some Buta-don restaurant easier. Buta don is well-grilled poke with sweet soy sauce over the rice. Many original sauces are there, sweet, sour, hot and sour and so on.