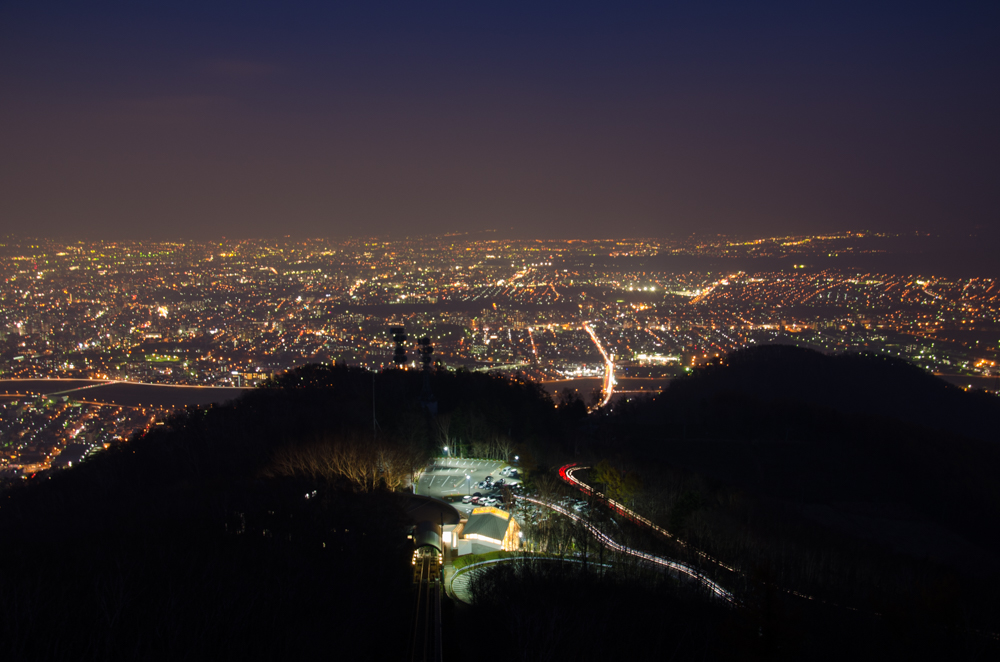 This place is written as [藻岩山] in Japanese.

As the new top 3 night view in Japan, Sapporo is certified along with Nagasaki and Kobe in this autumn, 3rd October.

When it comes to the best night view in Japan not only Hokkaido, Hakodate has been taken up ever. But now, the situation is changing, the power of the biggest city raise its position the second prize as the new best 3 night view in Japan.

Ropeway + mini cable car(to the top of the mountain) Indeed, there are so many lights spreading far away from east to west, south to north. Sapporo has its population more than 1.9 million, the fourth most population in Japan. There is no doubt that so many lights shining in the night of Sapporo city.

But Hakodate’s has been still one of the most beautiful night view in Japan as its unique shape. People are taking night views photos from the observation floor and self-photos behind night view.

Mt.Moiwa, 531 hight is located in the south-west area of Sapporo city. The mountain was supposed to made by volcano activity about 4 million years ago and Mt.Eniwa blowed up and its volcanic ash covering around the mountain where we call Sapporo.

The north-east area of Mt.Moiwa is designated as natural treasure of Japan. There are more than 400 plants and animals and Mt.Moiwa is very close to the center area of the city. This is a very unique situation for a million-population, big city in Japan. You can access to the ropeway station by street car and free shuttle bus from the central area of Sapporo.

The ropeway + mini cable car fare costs 1,700 yen for adults and a half for child. In the middle station, there are a shop and a gallery where photo exhibition or music concert are held. Not night view, it is nice to see the view of whole city and around. You have to feel how big Sapporo is. Visitors like to take their photos and leave a padlock for bewaring their eternal loves around the ring stage just like Seine’s one in Paris which were removed for safety of a bridge. You can enjoy both day and night. See this page for additional information of ropeway fare and others.